Stadtzeichen „Water“ at Fontänengasse is the entrance to Creative Quarter North. Only a few steps away from this first landmark, at the mouth of Kasteienstraße, you’ll find the next one – „Coal“. It states the outstanding importance of this raw material for the city which has had the most coal mines in Europe, and so, up to the mid 1960s, mining industry was the most important economic sector in Essen.

„Coal“ is designed as an obelisk made of black polished stone and just like the state of all those sculptures in the northern part of the inner city, it is neglected and desolate. This is how most of the passers see it. What I see is the high class stickers and just recently the installations that use the polished face of that obelisk as a showcase for street art. 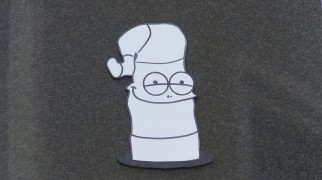 First in July 2015 a hippo made by Düsseldorf based artist SERGEI KRAVINOFF THE HUNTER attracted my attention. This was the trigger for me to keep an eye to this part of downtown Essen. I trusted, where one artist has left his traces, another will follow sooner or later. I hoped for more and I wasn`t disappointed. In May 2016 a new

tenant moved in and is still there. I still don’t have an idea who is responsible for this funny worm, which I call MR. EARTHWORM. He/she is just one more player in the game of making Essen’s boring downtown more attractive. The situation again changed with an unannounced landing of a ladybug created by EINSA CE at the obelisk in October 2017. I hope it will stay for a long time and will not fly away yet soon. The chances are not that bad; it is placed high enough to make it complicate to remove or steel it.

This site uses Akismet to reduce spam. Learn how your comment data is processed.